The Happy Sound Of Ray Conniff 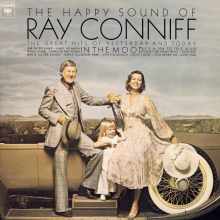 Arranged and conducted by Ray Conniff
Produced by Jack Gold
Photographs of the Conniff family (Ray, Tamara, and Vera) by Albert Watson
Designed by Nancy Donald.

I have been a Ray Conniff fan from the early days. In the beginning, I knew Ray as a brilliant young arranger who wrote hit arrangements for many artists. Then, of course, came the time when Ray Conniff created the happy hit sound of his own.
For the past several years I have been privileged to produce the albums Ray Conniff records so I have had a great vantage point from which to see how they really happen.
This album combines strong elements past and current which serve to illustrate both the timeless and timely quality that make the Conniff sound instantly recognizable but ever new. For example, first there is "Apple Blossom Time" with the familiar instruments and voices doing the sounds instead of words, then there is "In The Mood" which uses the new "wa wa" guitar sound that adds a new excitement to the rhythm.
In this album Ray has written his arrangements and positioned the musicians and voices with particular attention to how it will sound in quadraphonic as well as stereo. Quadraphonic, which involves four channels of audio instead of two as in stereo, makes possible new dimensions of pleasurable listening.
Ray Conniff ever the innovator, is in the forefront of those creating a product which will take advantage of new techniques and technology. It was with that in mind that Ray composed an original piece of music entitled "Ecstasy" especially for this album.
Incidentally, in the interest of getting a better "quad" sound, Ray returned to the style of recording the musicians and singers at one time instead of recording tracks with different sections at different times. Thus to get the newest in sound, he reverted to an old technique. Making records with forty people live at once brought back an excitement to the recording sessions that was enjoyed by everyone. I'm sure everyone will enjoy the listening too. That's what "The Happy Sound Of Ray Conniff" is all about. — Jack Gold