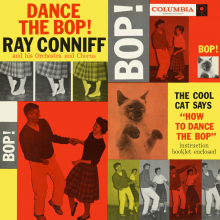 In an interview with Serge Elhaïk, Ray had this to say about the album:

I never wanted to record Dance The Bop. ... [Hal Cook of Columbia Records] was wishing me to do an album about a new dance which was possibly starting and was called "The Bop." He called me and he wanted me to record an album for each different step combination of that new dance. So I wrote a song for each different step and we recorded it under the title Dance The Bop, which was kind of more in the Rock'n'Roll sound with a lot of guitars. Everybody was expecting a second Ray Conniff album to be like the 'S Wonderful one. So we realized after a few weeks that we made a terrible mistake, because the sales were not going like those of my first album.

So Mitch Miller asked me to write arrangements as fast as I could for another album like 'S Wonderful. I worked day and night for that, and the result was 'S Marvelous, and we got a gold album! By the way, Dance The Bop! was pulled off the market.

The booklet "How To Dance The Bop" was written by Art Silva. He was paid a flat rate of $750.

The instruction booklet, "How to Dance the Bop," by Art Silva, is enclosed with this record. (Download PDF, 2.1mb)

There are two factors to be noted about this swinging collection of dance music. First, that "bop" dancing began among teenagers on the Pacific Coast and that it has no connection whatever with the jazz term "bop" or "be-bop." These young people were very young at the time "bop" had its heyday in 1945-6. Here is a case of young people liking the sound of a word and taking it over into their own vocabularies without realizing that it meant something entirely different in another musical field. Actually, the dancing beat here is derived from a country rock-and-roll or rhythm-and-blues.

The second point is that, in Ray Conniff's originals, based on and designed for the specific dance steps within the broad category of "Dance the Bop," the teenagers have instrumental music of the exact kind, tempo and sound they enjoy. Moreover, while the sound is based on the already-familiar concepts, Ray Conniff has added a few electronically-controlled innovations of his own ñ and those who already know his collection 'S Wonderful on Columbia Records will be aware of his inventive and imaginative arranging ñ in combining voices with instruments, so that the collection has a sound that is at once fresh and familiar.

Ray's trombone is heard throughout the arrangements, and at two points he can be heard singing (via tape) along with his own playing, an effect that produces a new and fascinating tonal color.

Ray remarked that he wished he had destroyed the tapes for Dance The Bop! after making them. I feel that is a bit harsh; there are some worthwhile tracks in the collection. Bop was more of a marketing blunder; it should have been released under the "Jaye Raye" or "Jimmy Richards" pseudonyms as it was not what people were expecting on a Ray Conniff record. However, around that time Ray was experimenting with various sounds, such as his solos on "Three Way Love" and "Walkin' and Whistlin'," both of which he also composed.

In later years, Ray's opinion softened a bit. In the early 1990s, he said that he would not mind if Bop were reissued on a small label in limited quantities for collectors. He called me sometime after the Collectables reissue in 1999 and didn't seem terribly bothered by it, although he agreed it should not have been paired with En Español.

Although I don't enjoy listening to the entire album in one sitting, I frequently include a few tracks in a random iTunes playlist with other Conniff instrumentals.