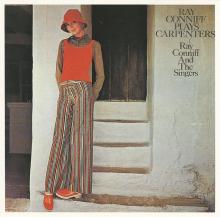 Produced by Jack Gold
Arranged and Conducted by Ray Conniff
Trombone solo by Ray Conniff
Engineering: Eric Prestidge - Sing, Hurting Each Other
Jack Lattig - For All We Know, We've Only Just Begun, (They Long To Be) Close To You
Dick Bogert - I Won't Last A Day Without You, Rainy Days And Mondays,
Superstar/There Was A Boy, Bless The Beasts and Children, A Song For You
Bruce Morgan - Yesterday Once More, Top Of The World