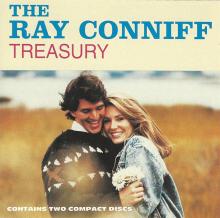 Who can ever forget the super sounds that Ray Conniff brought to the 1950’s, 60’s and 70’s! His orchestra and chorus were on every radio station, in every record store. His concerts were sold out coast to coast. His exciting renditions of S’Wonderful… That Old Black Magic… Somewhere My Love… Red Roses For A Blue Lady… Somebody Loves Me… Happiness Is… and so many more fabulous and exciting hits, will live in our memories forever.

His music is upbeat, it’s infectious. It gets into your sprit… gets you singing along… kicking off the shoes and dancing in the living room. Here’s the perfect music to add sparkle to any party, filling a home with happy sounds and cherished melodies… the melodies we all think of as old friends. Well, Ray is an old friend too… to everyone who knows his music.

Ray was a big band trombonist. He started out playing in local and forgotten society bands of the 1930’s, in and around his hometown of Attleboro, Massachusetts. In the mid-1930’s he hooked up with the great Bunny Berigan aggregation, later went on to Bob Crosby, Vaughn Monroe, Artie Shaw, and then Harry James. All this time, Ray was honing and perfecting his skills as an arranger par excellence. He was the arranger, in fact, for Artie Shaw’s big hits S’Wonderful and Prelude In C-Sharp Minor. That’s what brought him attention in the first place. His first Lp, S’Wonderful, came out in 1956, and stayed in the top 20 for nine months!!! He was on his way. He has made more than 80 albums since then selling literally, in the tens of millions.

Ray Conniff’s music continued to sell at a phenomenal rate throughout the onslaught of music fads such as rock and roll. He kept the good music flame burning brightly when all else looked bleak. And, thank goodness, he still does.

So it is with a great deal of pride that we are able to present this wonderful new collection of Ray Conniff’s greatest hits to our Good Music family. These are all original recordings in full spectrum stereo. They sound as good as they ever did. Better in fact because of today’s digital and playback technology. It is a Ray Conniff Treasury exclusive to Good Music customers like yourself, and one you are sure to play again and again.

When this set was released in 1994, I initally passed on it because it contained only material previously released on other CDs. It's not a bad compilation but is a bit uneven as it focuses mostly on original albums Sony had already reissued on CD in the USA then includes just a few from the 1970s taken from the 16 Most Requested Songs compilation.