Laughter In The Rain & Love Will Keep Us Together [SACD] 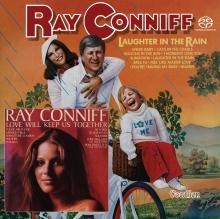 Released in December 2016, this was the first Ray Conniff SACD released by Dutton Vocalion. The hybrid SACD features the CD layer containing the stereo mixes and the SACD layer featuring both the stereo and quadraphonic mixes.

Laughter In The Rain

Love Will Keep Us Together