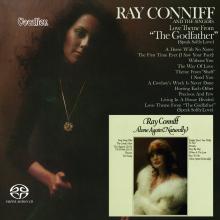 Released in December 2017, this was the second Ray Conniff SACD released by Dutton Vocalion. The hybrid SACD features the CD layer containing the stereo mixes and the SACD layer featuring both the stereo and quadraphonic mixes.

The packaging includes the studio photos shown on the back cover of The Godfather album.

Sample audio from the quad mix (rear channels featuring most of the instruments but no vocals):