Home » Discography » Original Albums » The Way We Were

The Way We Were 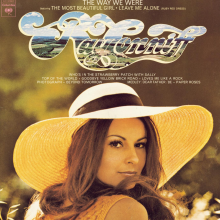 The orchestra on this album is basically made up of bass, drums, acoustic guitar, electric guitar, percussion and piano (doubling organ and electric piano). There is one exception however, on the song "Who's in the Strawberry Patch with Sally," I added a trumpet played by John Best, a clarinet played by John Bambridge and a trombone which I played myself (Dixieland Combo)
The singers consist of four sopranos, four altos, four tenors and four baritone-basses.
Those of you who have purchased the four-channel quadraphonic version of this album may be interested in the placement of sound as you listen on your four speakers.
On practically all of the songs I have separated the singers on to four separate speakers. The sopranos all appear on one speaker, the altos on a second, the tenors on a third and the baritone-basses on the remaining speaker. When you're listening this gives the exciting effect of being surrounded by the singers.
The bass guitar and drums appear to sound in between what I call the front center speakers. The rest of the orchestral instruments are placed in varying positions depending on what I thought made the best sound for each individual song.