Home » Discography » Compact Discs » The Many Moods of Ray Conniff

The Many Moods of Ray Conniff 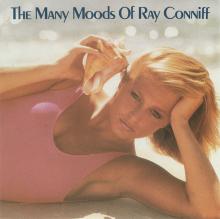 This CD was originally issued on a cassette called Somewhere My Love in the early 1980s. The original cover photo was of Ray and his singers on stage. With the exception of the cover, the cassette version of The Many Moods Of Ray Conniff is identical to Somewhere My Love, including its catalog number: BT 15903.

The CD was released in 1991 and includes two songs not available on the cassette: "Begin The Beguine" (with the singers from 1976) and "Blue Moon." "Lookin' For Love" is in mono; it was eventually remixed in stereo for The Ray Conniff SIngles Collection, Volume 2.