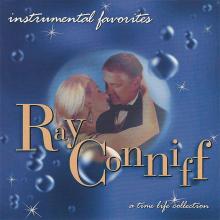 This compilation CD was produced by Time-Life and contains several of Ray's singles. It can be ordered by phone (1-800-488-4669) or from the Time Life website at www.timelife.com.

The Author: Joseph Lanza, author of Elevator Music: A Surreal History of Muzak, Easy Listening, and Other Moodsong (from St. Martin's Press), is a journalist whose interests include popular music, film history, and theme park culture.

The single "Wednesday's Child" is available in stereo for the first time in this collection. However, the singles "Winds Of Change," "Je T'Aime," "Park Avenue Beat (Theme From Perry Mason)," and "I've Got My Eyes On You" are all mono. They have subsequently been released on compact disc in stereo.

Ray Conniff's contribution to American popular music can be likened to a beautiful duet between music and marketing. Combining reverberating horns, skip-happy beats and heavenly singers, Conniff amassed a fortune making music that is suitable for dancing, singing along or merely permeating the atmosphere as an unobtrusive mood elevator.
Conniff's career parallels the rapidly changing musical tastes that spanned from the swing era to the advent of rock 'n' roll. Born in Attleboro, Massachusetts, on November 6, 1916, Conniff was bemused by his dad's piano playing but took to the trombone, learning the art of arranging via a mail-order transposer. Enamored with the big band fad, he hooked up with Bunny Berigan's Orchestra in Boston in 1935, en route to New York. By the '40s, he worked with the likes of Bob Crosby and Artie Shaw and even composed and arranged for Glenn Miller.
Conniff collaborated with Meredith Wilson and Walter Schumann for the Armed Forces Radio Service before reentering civilian life as a principal arranger for Harry James. But with the postwar demise of swing and the rise of bebop, Conniff had to make some vital aesthetic and financial choices. In 1948, he left James and bebop behind to roam Hollywood. Facing the pressures of foreclosure notices and supporting a wife and three children with only paltry gross earnings and low-paying manual jobs, Conniff became fixated on the equation between good music and good grosses. He diligently conjured the precise hit-making elixir by studying chart toppers and commercial jingles in order to glean rhythmic background patterns that would assure and subliminally lure listeners.
After soliciting every known record producer, Conniff greeted the '50s as a chief engineer and musical director at Columbia. There he worked again with James, at one point arranging the song Castle Rock for Frank Sinatra. He had a cameo appearance as a trombonist in Universal's 1953 film The Glenn Miller Story, and met the burgeoning television medium by supplying some arrangements for Lucky Strike's Your Hit Parade. Then, in 1955, Mitch Miller altered fate by asking Conniff to arrange the song Band of Gold for singer Don Cherry. For the first time, Conniff experimented with a chorus—a studio effect that made the song a bestseller.
Conniff's chorus—the main ingredient of his melodic alchemy—is arguably the first such juxtaposition of instruments and voices: trumpets paired with females, tenor and baritone saxes with males. Columbia's marketing department targeted Conniff as an artist destined more for albums than singles and christened his first LP 'S Wonderful in 1956. While launching his solo career, Conniff continued to lend his enchanted backgrounds to recordings by Tony Bennett, Frankie Laine, Rosemary Clooney, Marty Robbins, Guy Mitchell and Johnnie Ray. Besides proving arrangements for two big Johnny Mathis hits, Chances Are and It's Not for Me to Say, Conniff also combined them into a medley for his orchestra and chorus.
Conniff soon followed up his album debut with 'S Marvelous and was voted 1957's most promising bandleader by Cash Box magazine. His studio effects also improved, with an echo-reverberation that suggested a modernized big band accompanied by the clinking of supermarket shopping carts and cash registers. Theme from The Perry Mason Show (recorded during the 'S Marvelous sessions) demonstrated Conniff's occasional departure from his metronomic tempo for a more somber, elegant and sensual use of piano and voice. He also showed a knack for string orchestras with his two Concert in Rhythm albums, updating great masters such as Tchaikovsky and latter-day classicists such as Richard Addinsell, whose Warsaw Concerto is included here.
Conniff's voices excelled initially as background "do-doos," "ba-bahs" and "da-da-dahs," but they eventually went foreground. Ray Conniff and the Singers reached No. 9 in 1966 with Somewhere, My Love (Lara's Theme), from the film Doctor Zhivago, and won a Grammy for best performance by a chorus. Besides singing Winds of Change at the beginning and end of the 1968 Dean Martin movieHow to Save a Marriage (And Ruin Your Life), the Singers could be heard regularly in four-second radio station logo spots, exhibiting the familiar single-note-per-letter finesse of AM. The Singers went on for decades, releasing countless albums of popular song covers ranging from a cleaned-up version of the risqué Je T'Aime Moi Non Plus (Love at First Sight) to a reinterpretation of Gordon Lightfoot's folkyIf You Could Read My Mind as a quasi-Gregorian chant.
In the early '70s, the internationally traveled Conniff was the first American pop artist to cut an album in the U.S.S.R. using local musicians, singers and studios. Two decades later he continues to make records (usually with a Latin flavor) and gives concerts in Europe and Japan. He has culled a new generation of listeners, predominantly in the South American market.
With "a view to making the masses understand and buy records," Conniff won fans as diverse as the late Richard Nixon and adult-movie mogul Russ Meyer. Historically, he served as a touchstone for the middle class during America's most crucial technological and social changes. He represents a fascinating side of the musical culture that has withstood years of louder-than-thou cacophony and neglect from snooty critics. As long as there is a consumer pulse, the Conniff beat will keep right on tapping.
—Joseph Lanza