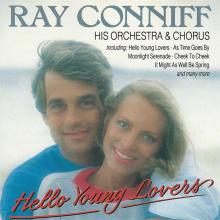 Compilation released in Great Britain in 1990.

Every time Ray Conniff lifts his baton, an audience thrills to the anticipation of another masterly performance. The product of years of hard work, devotion and imagination, all culminates in Ray Conniff the musical genius who created a new sound along with some very stylist arrangements, a selection of which is reproduced for you on this recording.

The Conniff sound began in Attleboro, Massachusetts, back in 1933 when Ray and some high school buddies decided to start a dance band, where Ray played trombone and scored all the arrangements. With this experience behind him Ray went to Boston and joined Dan Murphy’s Musical Skippers as trombonist/arranger and started his professional career as a musician earning the grand sum of 35 dollars a week. While on tour with The Skippers, Ray Conniff encountered Count Basie. The musical world had yet to discover the ‘Count,’ but Ray spent every free night at the Reno Club in Kansas City listening and learning. After leaving The Skippers he moved to New York and was instantly accepted into the Bunny Berigan orchestra. While with Berigan, Ray was heard by Bob Crosby and immediately offered a job with the famed Bobcats. By 1940 he was making quite a name for himself in music circles as an arranger and composer. It was for this ability, as much as for his virtuosity on the trombone that Ray was signed to the Artie Shaw Orchestra, then one of the three top bands in the country.

During his five years with Shaw, Ray did some of his best writing. After Artie Shaw, Ray joined Glen Gray as a straight arranger. Ray’s next job was with Uncle Sam, who for two years utilized his talents for the Armed Services Radio Network. After his discharge from the Army and during a couple of difficult but productive years, Ray Conniff developed a special sound which was to lead to many hit recordings and a great career. The secret of this sound was well arranged orchestral instruments with vocal production cleverly mixed-in to become part of the orchestra.

Like all great artists, Ray has matured and improved like a fine wine. His years of service to the great bands in the country, coupled with his inherent musical genius, have resulted in his deserved recognition. The magical ‘Conniff Touch’ transcends musical fads and fortunately for our, and future generations, it will be preserved for years to come.

Like the 's Marvelous Lp, the first beat is missing on "You Do Something To Me" and is left intact on "Where Or When." When CBS reissued the album on CD in the USA in 1987, it was just the opposite.